The IKEA business philosophy is: ‘We shall offer a wide range of well-designed, functional home furnishing products at prices so low that as many people as possible will be able to afford them.’

In the late 1940s, the first IKEA advertisements appeared in local newspapers. Demand for IKEA products soared, and Ingvar Kamprad quickly out­grew his ability to make individual sales calls. As a result, he began operating a mail order catalogue and distributed his products via the county milk van. This resourceful solution to a difficult problem led to the annual IKEA catalogue.

First published in Swedish in 1951, the IKEA cata­logue was, in 2006, published each summer in 47 dif­ferent editions, in 24 languages for 32 countries, and is considered to be the main marketing tool of the retail giant, consuming 70 per cent of the company’s annual marketing budget. In terms of publishing quantity, the catalogue has surpassed the Bible as the world’s most published work — at an estimated 160 million copies (in 2006) worldwide — triple that of its less materialistic counterpart. However, since the catalogue is free of charge, the Bible continues to be the most purchased non-fiction work. 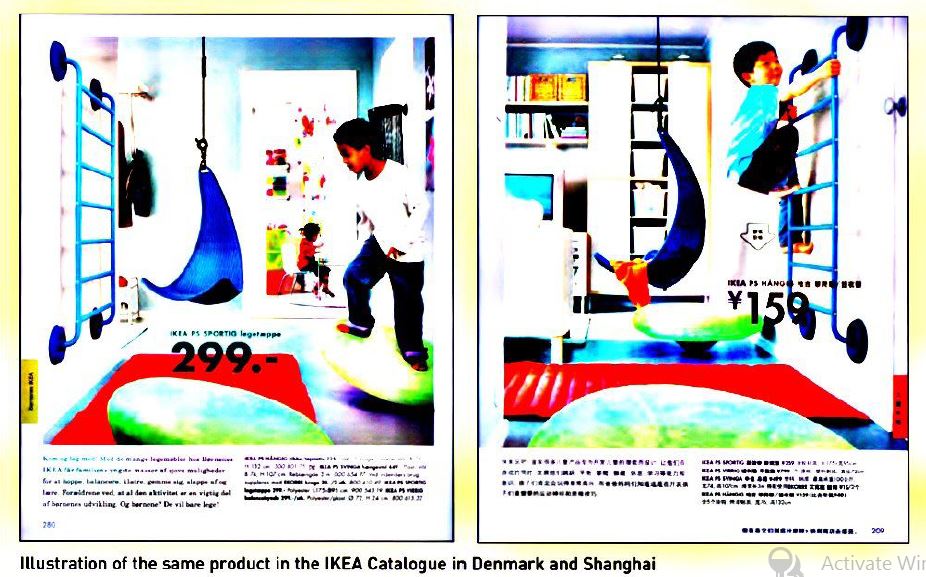 At the beginning of 2006 there were 221 IKEA stores operating under a franchise from Inter IKEA Systems BV. Total IKEA turnover in 2005 was 15.2 billion pound.

IKEA accounts for just 5 to 10 percent of the furniture market in each country in which it operates. More important is that the awareness of the IKEA brand is much bigger than the size of the company. That is because IKEA is far more than a furniture merchant. It sells a Scandinavian lifestyle that customers around the world embrace.

There are about 12,000 products in the total IKEA product range. Each store carries a selection of these 12,000 products depending on store size. The core range is the same worldwide, but as shown there are differences in how the IKEA catalogue displays its products in the different national editions. Here we have two different illustrations featuring the same product. In this case the two illustrations for the same product are taken from the Danish and the Chinese catalogues.